After some research, I decided to use an Intel-powered ex-Chromebook for my portable Linux project..    I settled on an Acer Chromebook c720p, as this could be ‘converted’ to run Linux natively, rather than in emulation via Crouton..    There are several articles on this, but I found useful info (and a chassis/mobo diagram) here:  https://ankitrasto.wordpress.com/2015/02/06/clean-installing-linux-on-the-acer-c720pc720-chromebook-a-complete-guide/ 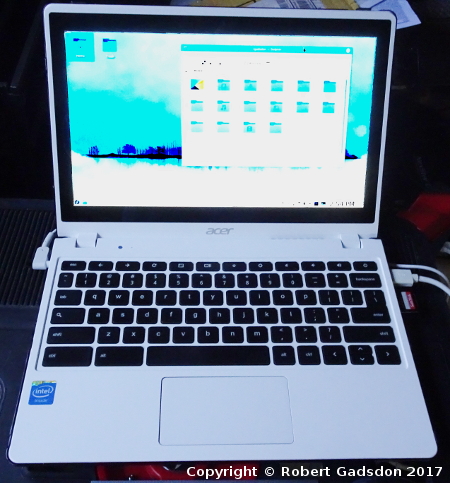 If you are going to do this, remember that the c720 disk can be upgraded, but the memory is soldered-on, so get one with 4GB memory!     I found one on eBay with the disk already upgraded to 128GB..

I started by installing Fedora 25, via a USB stick, but found – as usual – that the install was a bit hit-and-miss..    On the first attempt, the install failed as the bootloader failed to install, but on the second attempt, it all worked OK!    The existing Chrome OS installation took up around 11 separate partitions of odd sizes on the disk, and these all needed to be deleted, before the Linux install continued….

As I had been testing Fedora 26, I soon updated the C720 to this, and also found that KDE/Plasma ran quite well, and even the touchscreen worked – although I don’t have much use for it..

My only gripe, is the mousepad..  It is really an Apple-clone, and functions as a single button, although scrolling is possible (like a Mac) by using two fingers side-by-side..    As I did not want to tie up a USB port, I used a Bluetooth mouse, and this seems to be working quite well, and even functions in console mode..