I recently obtained one of the newly-released (- to the ‘public’..) Pine64 ARM64 systems…    My first reaction, was that it is a bit on the large side..  The board is over twice the size of the Odroid C2.. 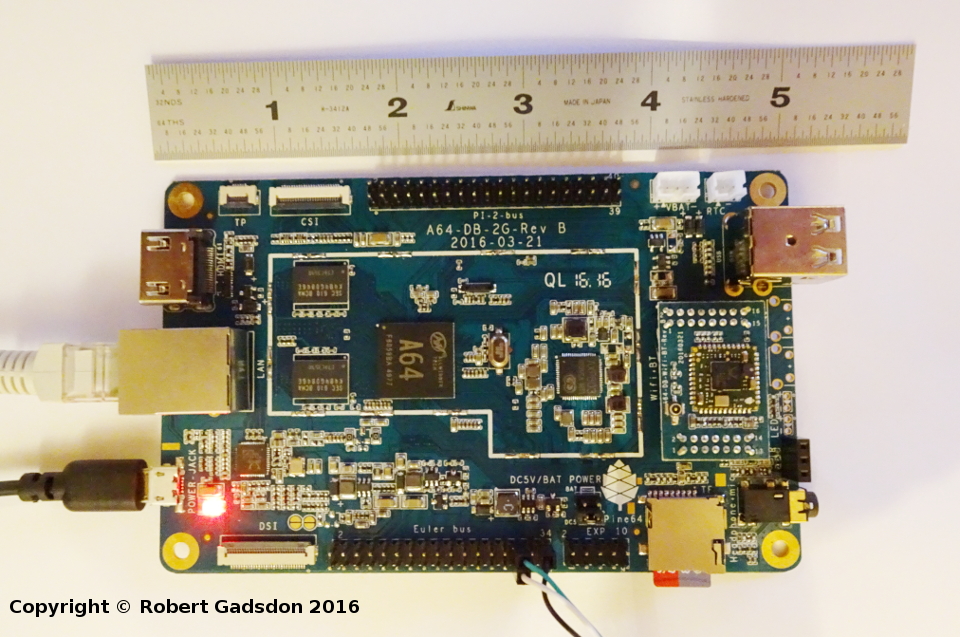 As usual, the ‘standard’ U-Boot was a heavily-customised old version, that only mounted Android-format Kernel ‘blob’s, but a hacked version of this – which loads standard ARM64 ‘Image’ kernels, is available, and I used the one from the Debian/Longsleep image referenced on the Wiki:  http://wiki.pine64.org/index.php/Main_Page.

I substituted a Fedora 24 aarch64 root filesystem, and everything worked OK.

I then tried the patched 4.7-rc1 kernel from here:  https://github.com/apritzel/linux/tree/a64-v5.    I found that this did boot, if the Kernel config was left unchanged after ‘make defconfig’..

I found that the networking did not work, and so had to select this (ST Microelectronics / STMMAC / Allwinner GMAC), and this is still being tested, along with other deselections of ‘unwanted’ options..    I had originally just selected ‘Allwinner..sunxi..’ under the ‘Platform selection’ option, but this did not boot…      The aprinzel kernel is still very much work-in-progress, and there should be later versions soon..

I did try a patched version of the mainline U-Boot, from here:  https://github.com/apritzel/u-boot/tree/pine64 , and I did get it to load (boot0 plus u-boot image) and run, but the resulting kernel boot (using a known/good kernel) was unsuccessful…

One other thing to watch..   I did get the wifi/bluetooth plug-on daughter board, but this became extremely hot, after a short while, and I removed it..