Recently took delivery of a Radxa Rock2 ARMv7 system, based on the RX3288 Cortex A17 chipset.. 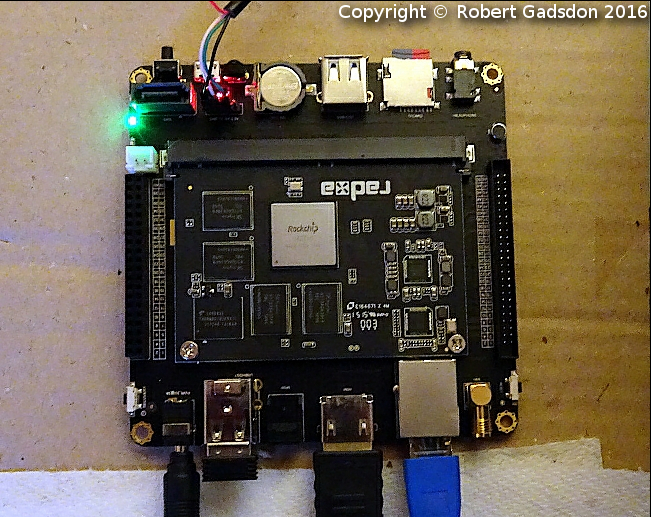 The system comes with a version of Android installed on the onboard eMMC, but I managed – after a bit of work – to install Fedora 23 on an SDcard and get it to boot onto that..      At this point, I should mention that the online documentation could best be described as both confusing, and lacking in details..

So far, I have managed to get the pre-installed kernel – an antique patched version of 3.10! – to boot into the Fedora rootfs on the SDcard:

The system still boots from the eMMC, though, and the partitions on this are effectively inaccessible from Linux, as they appear to be (re) created by scripts during the boot process, which seems to be based on something similar to fastboot (but not actually fastboot) plus a heavily cut-down (and apparently uncontrollable) version of an old release of U-Boot..   The layout of the SDcard is odd too, and needs the Linux rootfs partition to start after the first 72MB, otherwise it is not found at boot time..

I had tried following the (confusing) instructions to build and flash a newer version of U-Boot, and to flash this to actually boot from the SDcard (rather than just to it) but – so far – without success..     At this stage of the game I am reluctant (although tempted…) to just ‘erase’ the eMMC (dd if=/dev/zero.…etc…)

The other frustration is that the ‘inaccessible’ kernel image forces the use of selinux…    I had (as usual) set selinux to ‘disabled’ in the config, but this resulted in the boot process hanging consistently..   So, for the time being, I have had to set it to ‘permissive’…

The good news is that this system is fast, compared to the other armv7 and aarch64 systems I have..

That is as far as I have got, but there is (obviously!) much still to do, and I am afraid that much of it will be (un)educated guesswork on my part..

More news, when I have it..